Dr. Tom Waddell
Decathlete and creator of the Gay Games 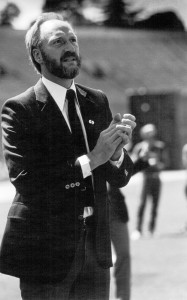 Tom Waddell had a good sportsmanship encouraged by his adoptive parents Gene and Hazel Waddell, former acrobats.
Member of the US team at the 1968 Olympics in Mexico City, he ranks sixth in the decathlon.

In 1971, at a competition in Hawaii, a knee injury in high jump breaks his sporting career, but not his Olympic dream.

He then had the idea of a gay sporting event in the spirit of the Olympics. Thanks to her determination, the first Gay Games were held in 1982 in San Francisco.

Waddell died in 1987 due to AIDS-related complications. The story of his life was recounted in his autobiography Gay Olympian as in the American documentary Common Threads: Stories from the Quilt which won the Academy Award for Best Documentary Feature in 1990.