Paris 2018 and French Federation of Fencing

On Sunday, January 22, at the CIP, the French Federation of Fencing (FFE) and PARIS 2018-Gay Games 10, signed a convention on the organization of the event, which will take place in Paris from 4 to 12 August 2018. The FFE, which supports these championships, is entrusted by Paris 2018 the organization of the fencing competition, which appears for the first time on the program of the Gay Games since their creation in 1982.

Manuel Picaud, President of PARIS 2018-Gay Games 10: “For the first time since the creation of the Gay Games in 1982, fencing is on the program of the 10th edition of Paris. It is this partnership with the French Federation of Fencing that makes possible the organization of this sport. And we are pleased to offer this new activity. “. An event at which the FFE was very early sensitized: “we share our premises with Paris 2018, which has made us even more aware of the event,” says Isabelle Lamour. The FFE is therefore committed to organizing the event, communicating the event and recruiting participants. 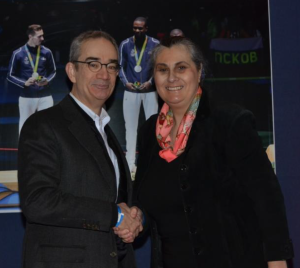 Isabelle Lamour, honorary co-president of PARIS 2018-Gay Games 10, welcomes this partnership with Paris 2018 organization for which she has “a great deal of respect for their total commitment to the cause they defend “. Manuel Picaud hopes, through this convention, to pass “a strong message to advance the mentalities in the world of sport, especially on sexual orientation or gender identity, but also on the universality of sport. “